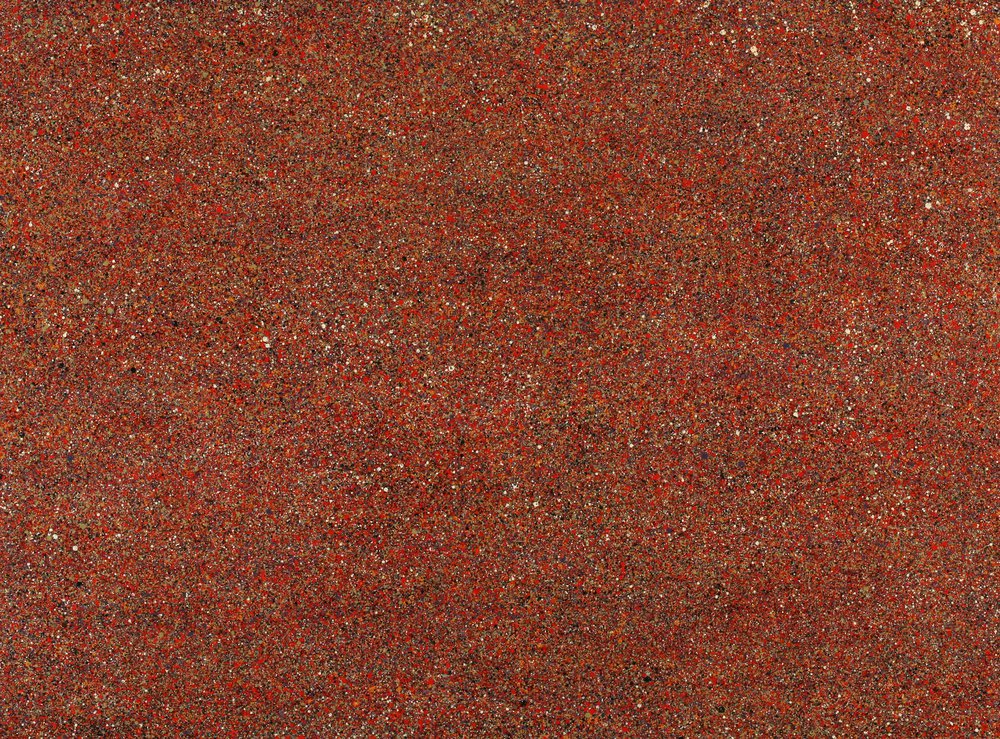 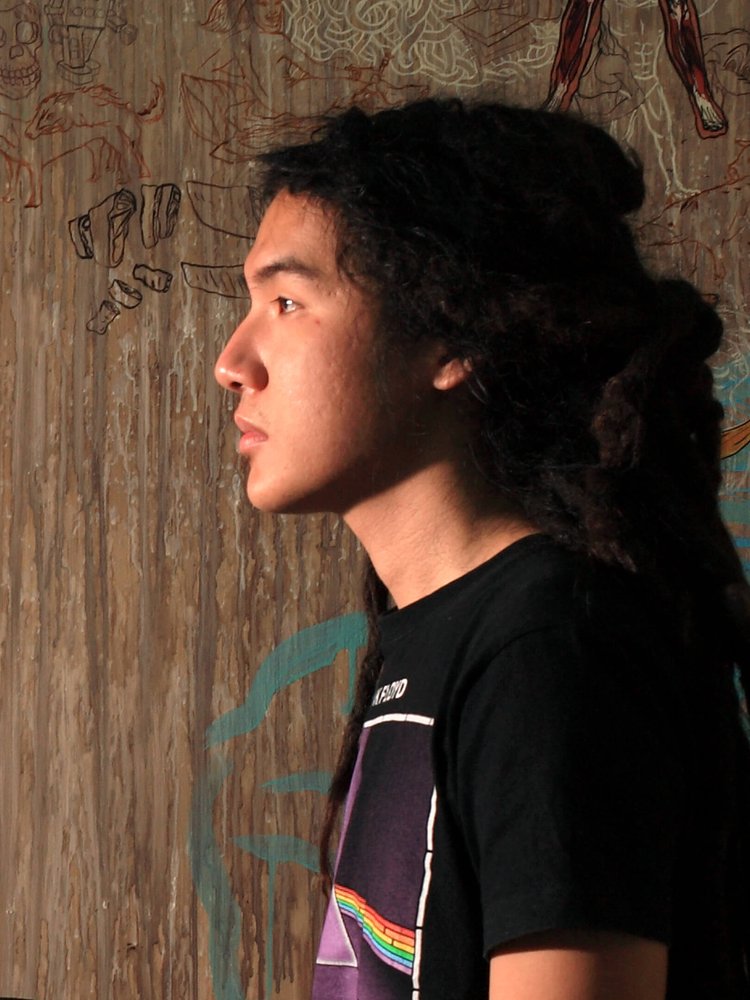 The Wall (2008) by Justim Lim is made up of layers of multi-coloured paint speckles that cover the canvas in a blanket of dots. There is no narrative present and the painting is entirely non-representational.

It begs to be related to Abstract Expressionism and the visual elements of the painting suggest that is the product of instinct and spontaneity. However, there is more that governs the work, as cued by the title of the series the painting belongs to, Agents, Actions, & Consequences.

Consider each word. ‘Agents’ denote the medium, ‘Actions’ signify the performed acts by the artist, and, ‘Consequences’ is equal to each mark made on the canvas that leads to the end product or the final artwork. This calculation appears to be a simple exercise in semiotics, though – in critical terms at least – it suggests a linear journey was undertaken in the production stages, diminishing suggestions that the paintings in this series were incidental, unpinned, or, totally reliant on inner expression.

Environment (2006) also follows this argument, though pictorial ingredients are present, representing the artist’s first steps into infusing narration in his works.

This trait reaches maturity in Lim’s most recent paintings in this collection, The Portrait (2008). The painting, a descendent of official portraiture, was also the first Lim created during his residency at Rimbun Dahan, Kuang (2008-09).

As evidenced by the wire mesh, dripping paint, and paint speckles in the upper-right and lower-left corners, The Portrait bears continuum from his previous works but is dominated by the central figure, or rather, absence of one. The figure is invisible, but from the songket (traditional weave) background and royal costume - Tengkolok Diraja with crescent and pointed star, Muskat with embroided gold thread, Keris, royal buckle, and insignia - the painting is evidently meant to be an official portrait of Malaysia’s official ruler, the Yang di-Pertuan Agong.

The work questions the importance we place on individuals or stately positions and the level of autonomy we have as individuals: do we have any freedom at all? This painting, as hinted in the title, owes much to French semiologist, Roland Barthes’ (1915-80) definition of ‘myth’. Barthes’ texts sought to demystify accepted significations in society that distorted truth, and with Lim removing the actual figure in this portrait, it’s arguable he seeks to reveal more.

Other works from this series also challenge viewers to question the veracity of popularly held beliefs. The life-sized triptych, Gods, Heroes & Myths (2008), for instance, questions the value we place on non-existent or costumed heroes to fight our battles. The painting features six figures lined up horizontally. In the centre, a butcher stands proudly with meat carcasses hung to his left, whilst all the other figures angle their attacks towards him. The butcher’s unfazed expression – a contrast to the dynamism of the other figures - adds tension to the work and his headgear, denoting his religious identity, is poignant, considering the unfounded fear and discrimination against the Muslim community worldwide during the last decade.

Meat carcasses are also seen in Toyol (2008); washed out ones appear at the top of the canvas, whilst sanguine ones form a hill on which two young figures are perched. Their heads are replaced with a bomb and hand grenade, intensifying the already savage picture. The title refers to a mythical creature in local Malay folklore that complies with the bidding of its master through the use of black magic. And, not only does the painting challenge urban myth and superstition, it’s also the artist’s take on politics, which uses fear as a tool for suppression - not dissimilar to the downfalls of placing trust in ghosts or other such apparitions.

These works were all produced in 2008, the year the artist returned to Malaysia. It was also a year memorably shaped by an engaging political environment (notably Malaysia’s 12th General Elections) and Lim drew upon the events surrounding him with a sense of urgency to both document and make socio-political commentaries of his own. 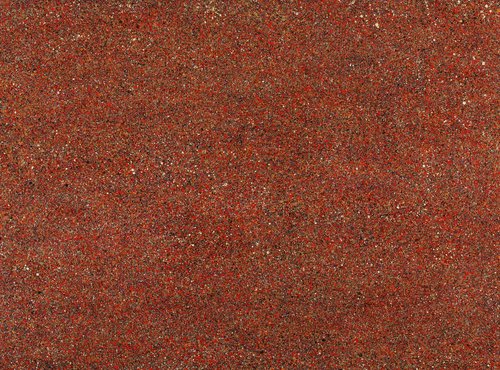 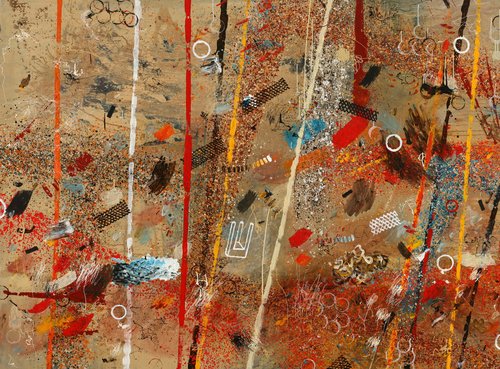 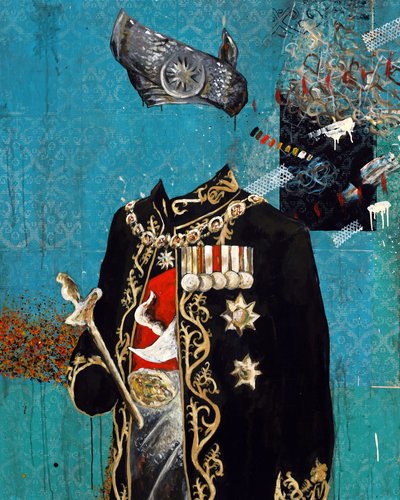 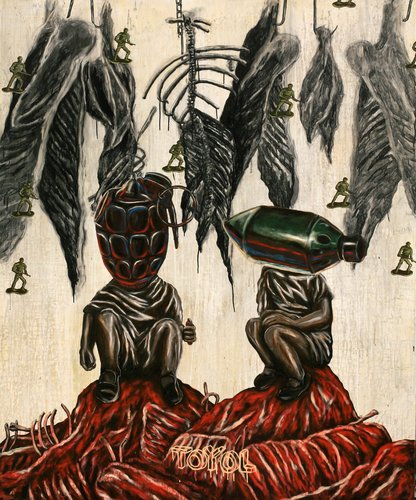 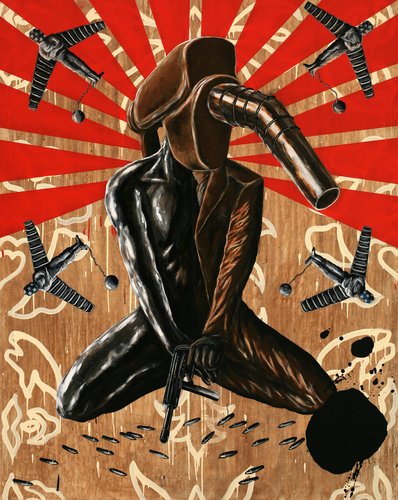 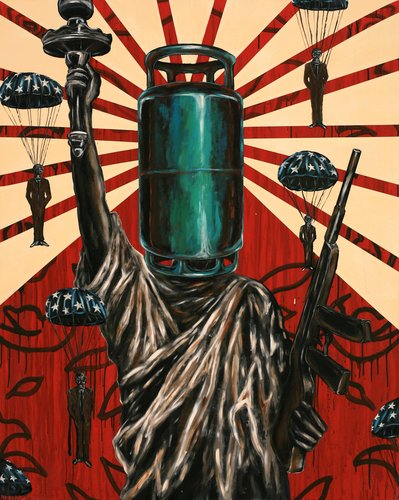 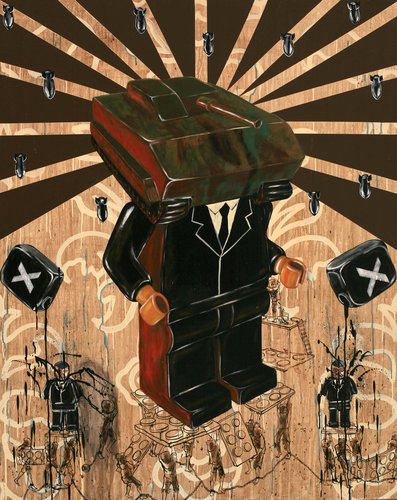 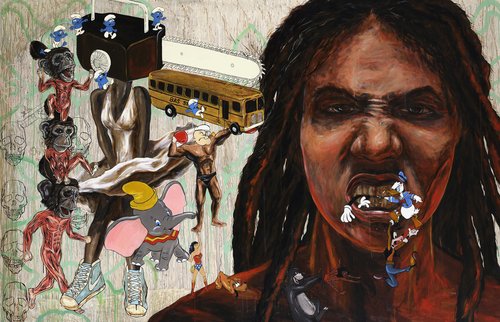 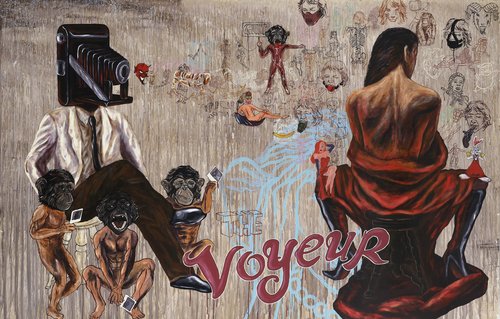 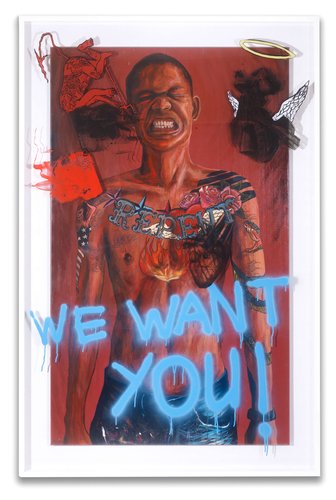 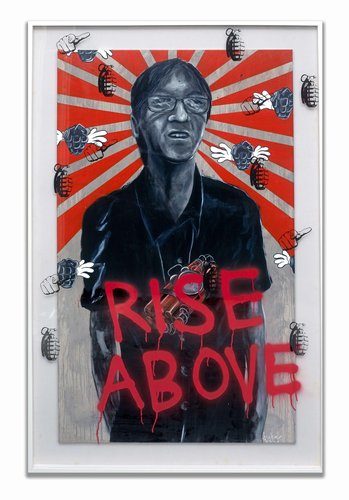 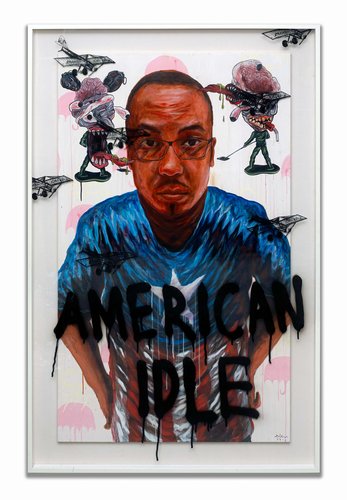