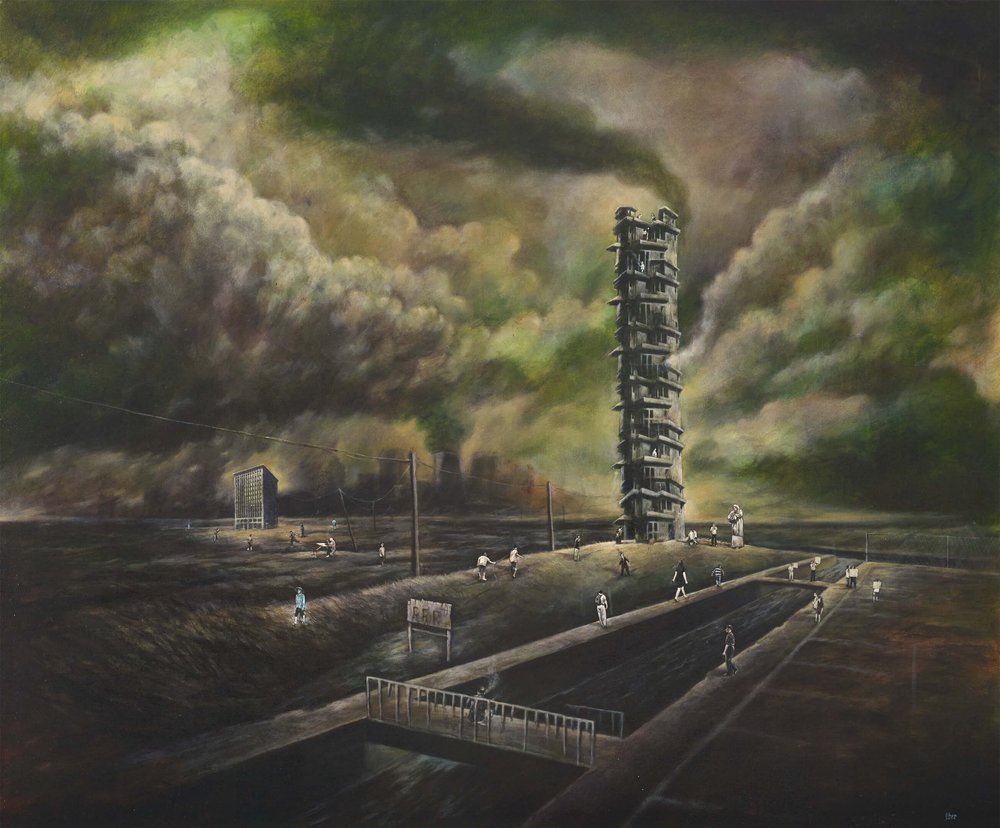 Ilham Fadhli’s sculptures possess a quiet ethos that is quite the opposite of his contemporaries. He was taught at UiTM by senior artists such as Zakaria Awang, Ramlan Abdullah, and Ariffin Ismail – all proponents of more traditional mediums – but is instead known for a series of minute sculptures that project various mise en scène, or frozen moments, that are encapsulated within fragile light bulbs. Architectural props (small figures, plants, and even street lamps) are utilized to create artificial actors for the artist’s narratives and there is a strong gesture of stillness present in these works; it is as if these tiny worlds have come to a permanent halt for viewers to gaze upon. These sculptures borrow the visual and conceptual language of the diorama, miniature three-dimensional models of scenes, with their origins in early 19th century France.

Ultimately, however, Ilham’s sculptures offer a good lead into his two-dimensional artworks - paintings - that he began to work on seriously since the mid-Noughties. There is continuation in the portrayals of miniature worlds that seem far-flung from reality: figures are juxtaposed against large vacant backgrounds; it is a melange of collage and paint (mirroring the combination of objects in his sculptures); and again, time appears suspended.

Ilham, or Kojek as friends know him, prefers to work in monochrome, exploring gradients of single colours, though chiefly greyish-blue. Green Hell (2008), for example, highlights this singularity. It depicts nature’s force (coinciding with the theme of the exhibition this artwork first appeared in) through the placement of a mammoth tree in the very centre of the image and giant animals, which both dwarf the minute figures and buildings. The difference in size, notes the artist, is meant to remind viewers of their existence as humans, though there is also a rational cause: Ilham works in a very small studio and the often vast backgrounds he illustrates are manifestations of his subconscious desires. Moreover, the artist paints at night, lending another rationale to his choice of hues.

Ilham generally views his works as products of post-industrialism. Many of his paintings include images of factories and concrete building blocks, which along with the aforementioned visual traits of his works (dimension of figures and single colours) emphasize the topic of solitariness and isolation in urban environments. This is clearly seen in Histerik Arsonis (2008), where a burning building stands before an eerily disassociated audience, whilst a male figure in flames and a desolate city begin to go up in smoke. As in the other painting in this collection, there is no single viewpoint and the artist’s choice of having multiple narratives within each painting is a conscious one, aimed at tugging audiences inwards to spend more time analysing. This can be traced to Ilham’s other endeavours. The artist is a bass-player in a punk band and has also helped his wife, installation artist Azlina Ayob, with her own artworks, including the life-sized board-game parody, Monopol, which was exhibited at the Fukuoka Asian Art Triennale in 2005. This work, and also his performances, encourages direct involvement from viewers, and with these in mind, it’s possible to understand how Ilham desires the same ignition of response and interaction with his paintings.

The artist’s influence are as diverse as his undertakings and inspiration comes from a number of sources, from the highly theatrical films of Federico Fellini and the imaginative and satirical tales by Will Self. Other influences include the 19th century Swiss painter, Arnold Böcklin, and the installation artist, Ilya Kabakov. However, it is Zulkifli Dahalan that Ilham is most inspired by. 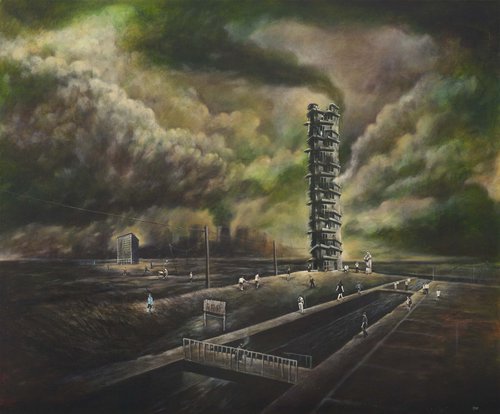 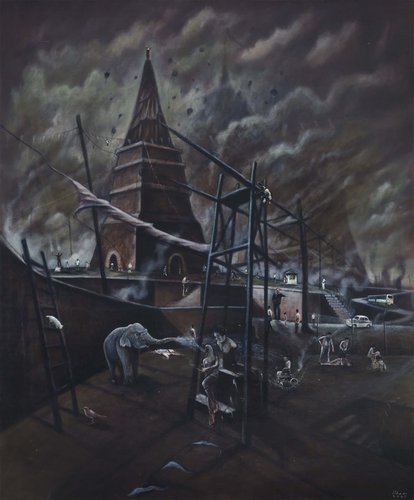 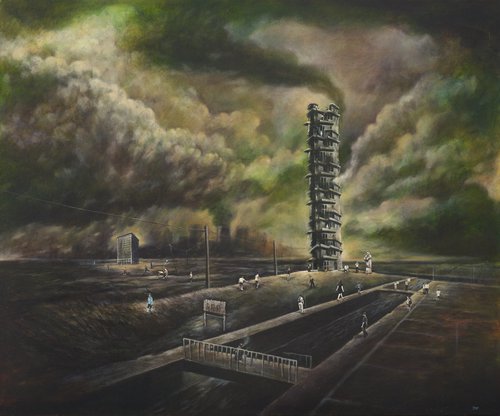