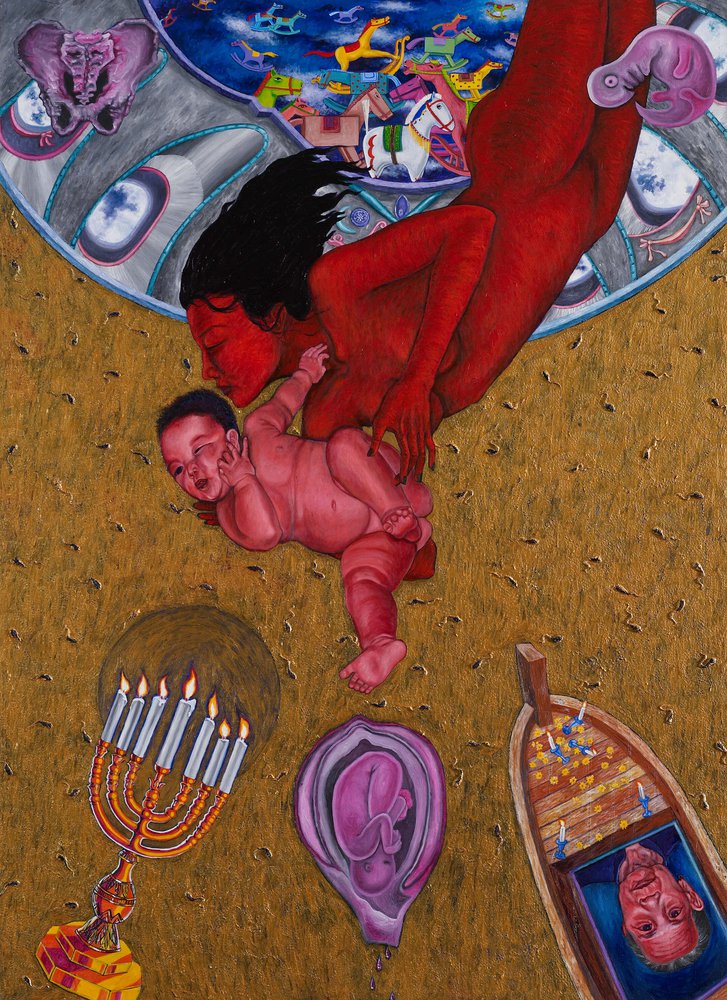 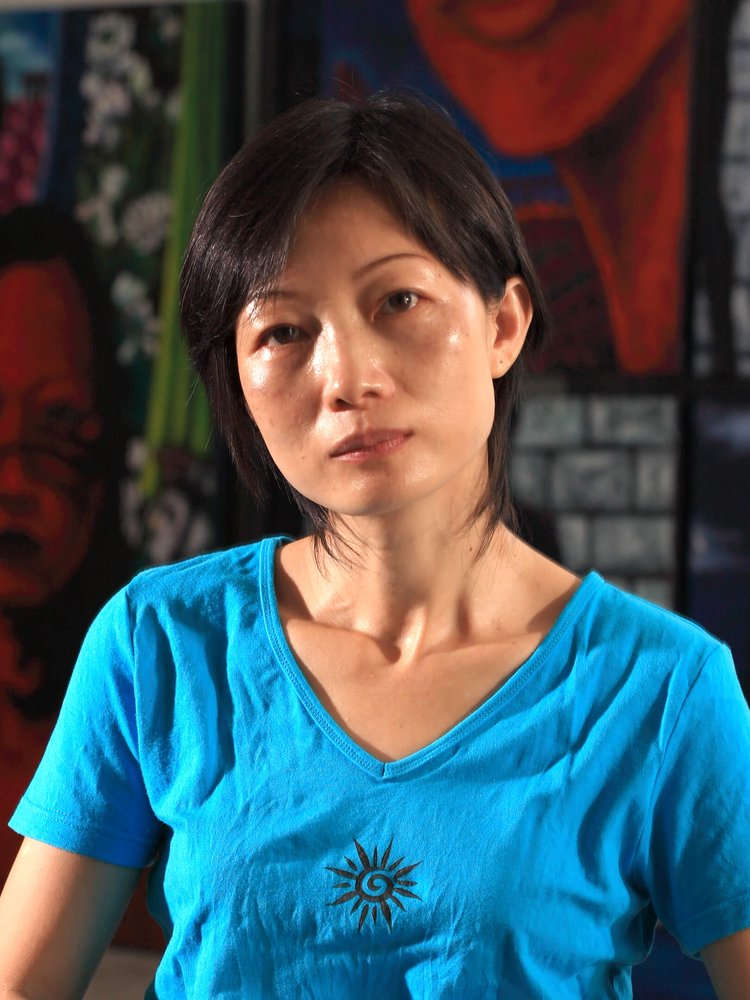 Two terms have been used to refer to the artworks of Eng Hwee Chu: magic realism and surrealism. Critics concocted the first label in tandem with Eng’s emergence as an artist to note in the 1980s and it summarizes the accuracy of her portrayals and the element of fantasticality in her paintings, seen especially in the seminal Black Moon series (1989-91). It can be divided into two separate phases that encapsulate the artist’s style.

The first phase, paintings Black Moon 1 to 7 (all 1989) conjure a very melancholic atmosphere; lonesome figures are seen in bleak Chiricoespque landscapes and stoic masked creatures lend a sinister aspect to the works. The second phase (from 1991) marks obvious developments: the palette incorporates more warm hues, figures are more defined, and the number of elements increases dramatically; there are floating lotus flowers, hobbyhorses, flags, and in Black Moon 9, and even coca-cola cans, as seen at the top of Black Moon 9.
The artist’s presence, as the figure in red, has also become more brazen and pronounced.

The second term used to classify Eng’s works is surrealism and opinions aver that it is more apt a description than the first.
The word ‘surrealism’ means the uncanny or bizarre and is associated with the art movement that touched on the dreamlike and implausible in the early 20th century. This does not mean, however, that they were not realistic. They were, especially in the case of surrealist photographic works, where the mimetic functions of the camera did not hinder, but enhanced the aspects of what surrealism meant. Eng’s works can be viewed in tandem to the black and white photographs of Brassaï (1899-1984) whose works have left an important record of Parisian society between the war years that is rarely seen.

The surrealist photographer believed the truth about society could be gained from the city’s denizens of the night. Eng appears to embrace a similar belief about the illuminating power of nocturnal time. In a preface to a 1997 exhibition, she declares: “THE BLACK MOON IS THE REAL MOON: THE LIGHTED MOON IS THE GLORY OF THE SUN. I believe it is in the dark cold night that we reveal the true us. Black Moon exposes the scary faces of hypocrisy.” Eng’s paintings can be seen as inner reflections and also attempts to grasp the truth about her identity; the red figure (self-portraits, if anything) is the artist’s portrayal of the visible self, or ‘ego’ as in Freudian terms, whilst the shadowy presence is her primal ‘id’.

Eng’s works have often been compared to that of Leonora Carrington (B.1917), one of the few female surrealist artists who reached a relative semblance of the fame comparable with her male counterparts. Both women employ the devices of surrealism, and, inject their female identity into the works. Eng’s paintings, in particular, are autobiographical and illustrate her collective memories: representative are My Childhood Memories [2001]), illustrating the artist’s childhood when she yearned for a hobbyhorse, or changing roles as a woman - from daughter to bachelorette, spouse, and mother.

Reborn (1997) represents the artist’s later roles: Eng married installation-artist Tan Chin Kuan in 1993 and the painting features the artist with newborn baby. Surreal details include a floating embryo and a number of hobbyhorses on a curved ceiling, a boat sailing away in a sea of gold with an image of Eng’s late grandmother (seen before in Memory [1994]), a foetus, and a candelabrum. The painting also indirectly refers to the artist’s spirituality, as it is reminiscent of Christian art found on apses in churches or altarpieces.

Symbolism is used extensively to enhance the narration. She uses the red figure to represent strength (as opposed to the monochromatic shadows that reveal little of her inner-self). Doves represent the Holy Ghost and, in more recent works, it is evident that Eng has matured in style, presenting more complex scenes and detailed figures. My Liberty (2000) is an example, where the artist’s hands appear bound by rope.

The figure’s pose and the addition of the cherubic child recall Botticelli’s Birth of Venus (c.1485). There are also strong allusions to her ethnic roots. In Lost in Mind (2008) – the most recent work in this collection – she includes elements such as a section of a Chinese roof and figures in traditional costume, in the manner of old miniature paintings. 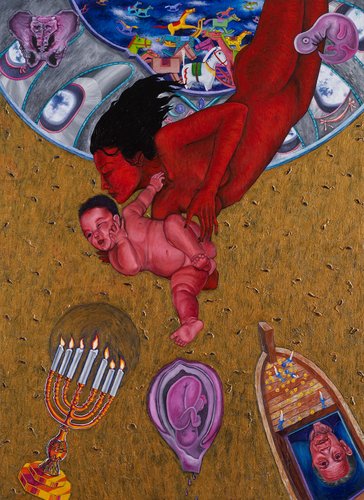 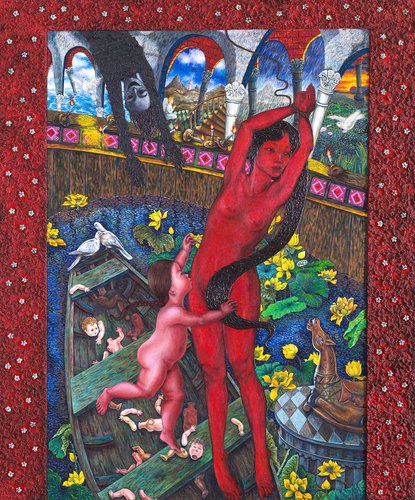 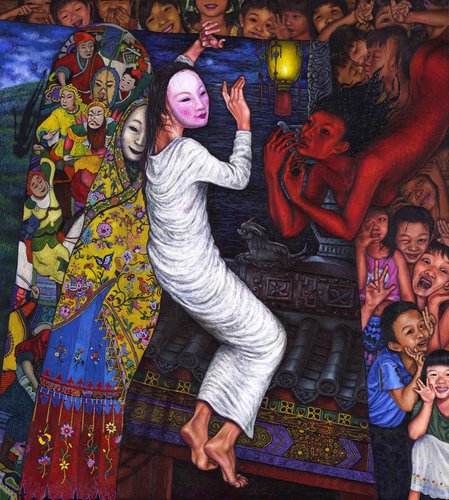 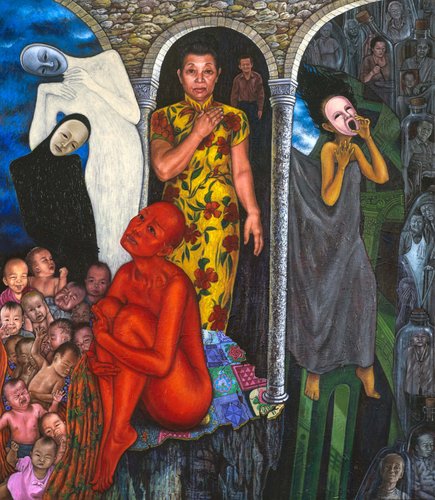 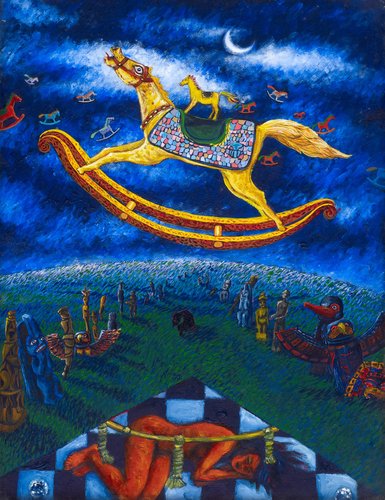 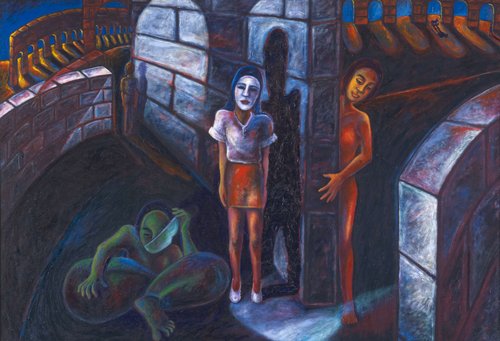 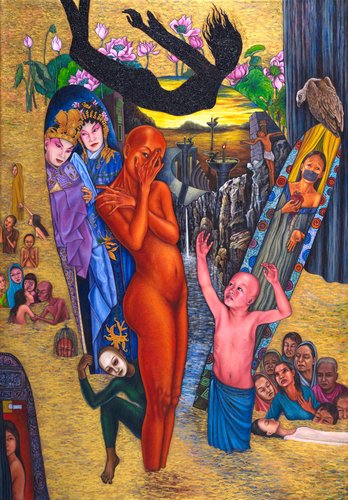 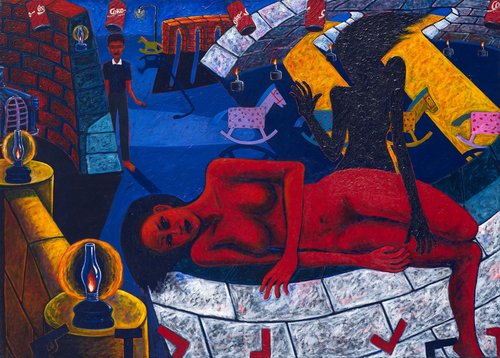 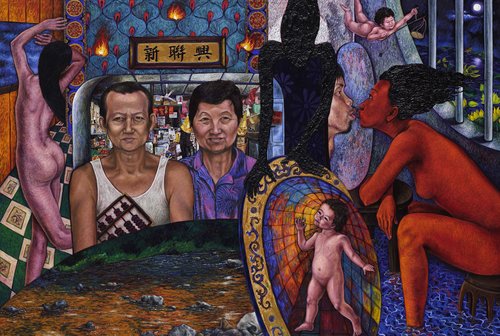