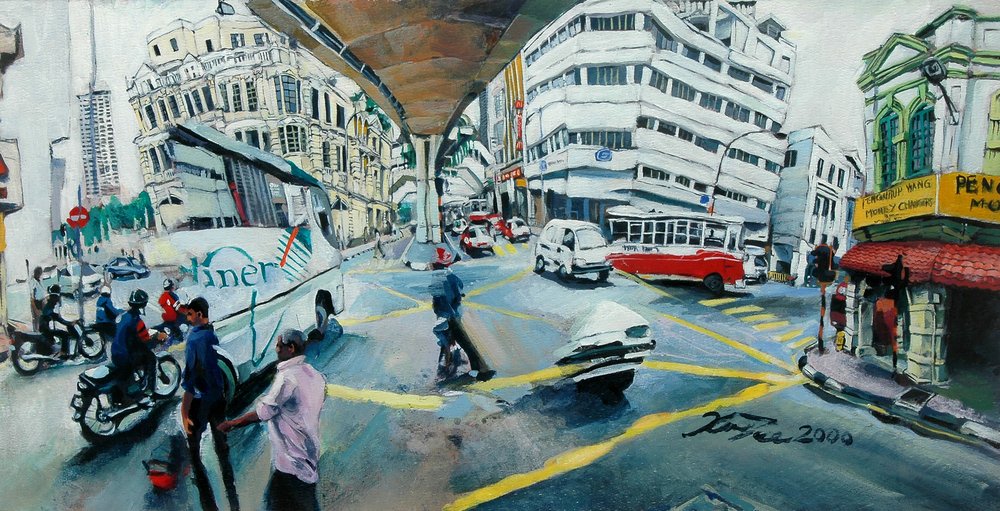 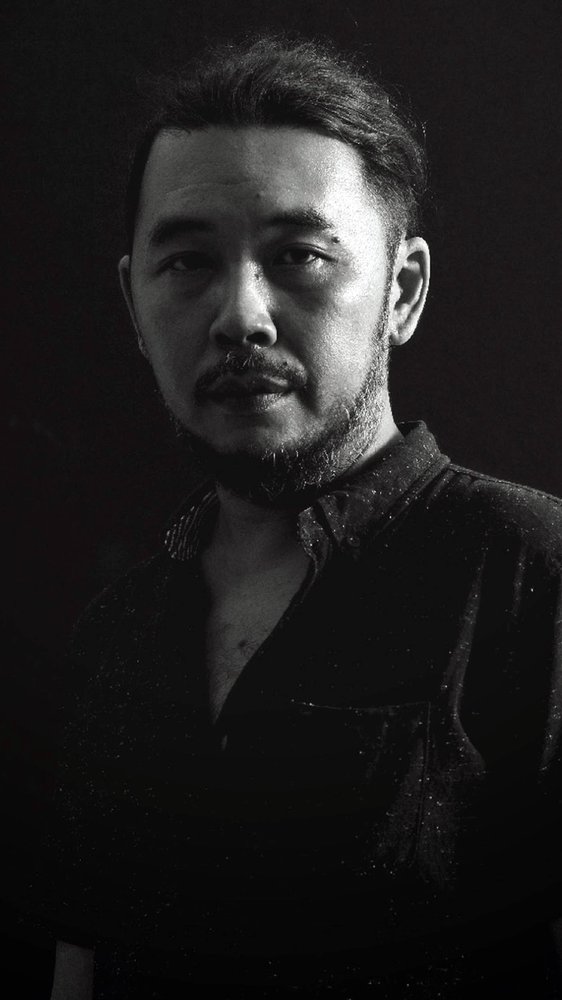 Chin worked as a cartoonist and commercial artist locally and also in Hong Kong and Singapore before becoming a full time artist.
His crossover was spurred by the financial crisis of the late 1990s, which saw many publishing houses go under. Despite the boom in conceptual and installation art in Malaysia during this period, Chin persisted at more traditional subjects, faithful to the notion that art is based on spiritual and inner impulses.

The earliest works of Kuala Lumpur born-and-bred Chin were on the places he knew best. The urban landscape of Malaysia’s capital – and later, other cities as well - is subject matter in paintings, such as the nightscape, KL at Night (2005) and the work on paper, Place Series – Kuala Lumpur No. 6 (2000).

The latter is highly reminiscent of en plein air (in the open air) studies in artists’ sketchbooks, but differs in the level of realism and the unique composition and viewpoint; the car and figure on the right-hand side of the painting are cropped, and so is the bus on the left, making it seem as if the image is composed of two separate ones that have been melded together.

Unconventional perspectives also feature in other works, such as Undulating Spaces (2003), which presents a 360° - as if you have spun around on one spot – view. Natural landscapes, such as Cerulean Skies – Terengganu are portrayed with curved angles that allow for the landscape to extend further than normal. The artist has almost captured one end of the beach to the other in a single artwork. This optical ambiguity recalls Bar at the Folies-Bergère (1882), a work by Édouard Manet.

However, it is probably Chin’s own philosophy that best sheds light on this matter. The artist labels his approach as Actuality Accorded Painting (AAP) – a term to describe the actuality of any viewing experience; scenes are rarely stagnant and elements are constantly shifting or changing, such as the moving clouds in the sky or the gust of traffic as traffic lights turn green.

In short, Chin aims to contain the past, present, and future within a single frame. For this, the artist uses a dramatic fish-eye lens perspective. Breakfast at Penang Kopi Tiam (2005) highlights this approach effectively: as a viewer, you can easily imagine yourself travelling from the concrete footpath on the left of the painting to the tiled floor of the kopitiam (coffee shop) and onwards to the shop next door, which appears to be another local dining establishment.

Overall, Chin’s palette boasts incredibly saturated colours which, coupled with AAP, results in images that are hyperrealist and reflective of the swift changes in today’s landscapes. The artist has taken this approach one step further with his digital art (2006-present) that features digitally manipulated photographs bearing concaved perspectives, similar to his paintings. Chin has also produced portraits in the traditional full-frontal poses, complete with a raw quality associated with Francis Bacon (1901-92). 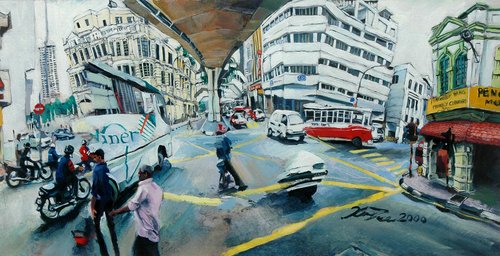 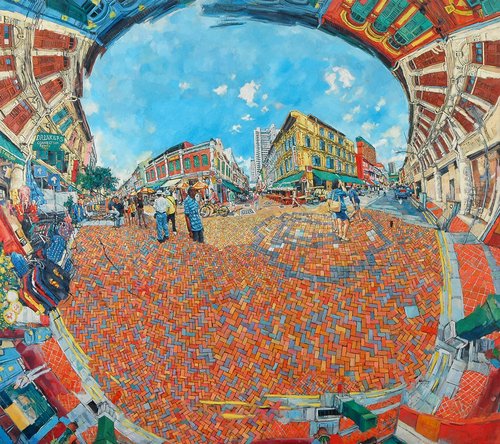 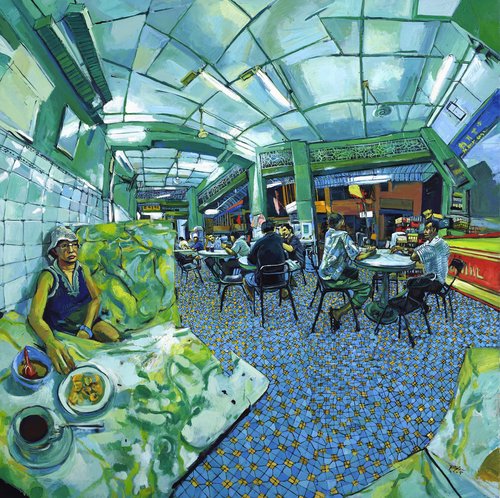 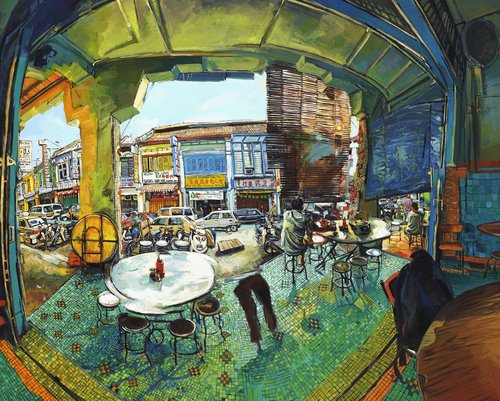 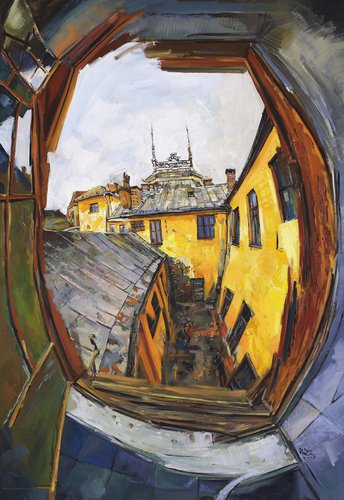 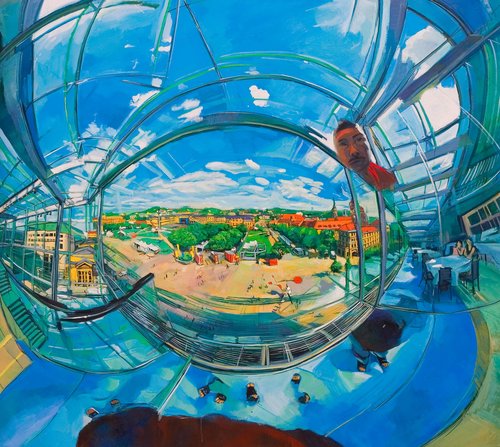 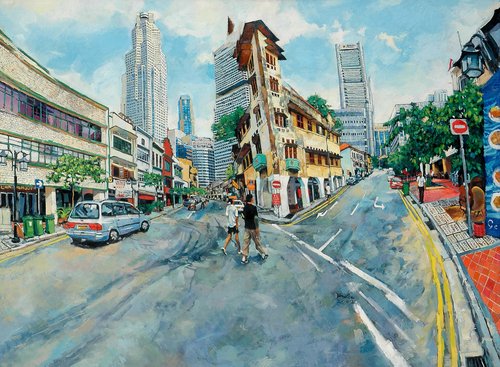 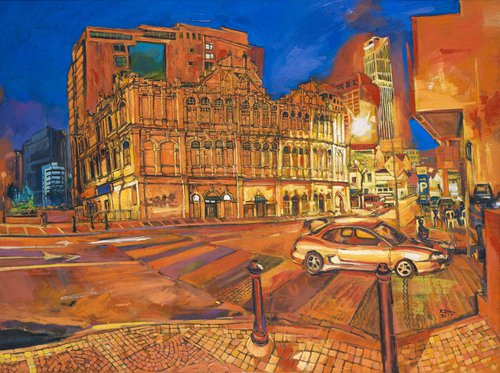 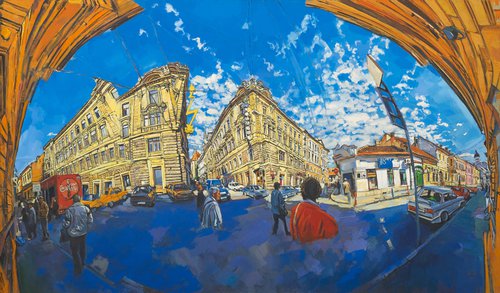