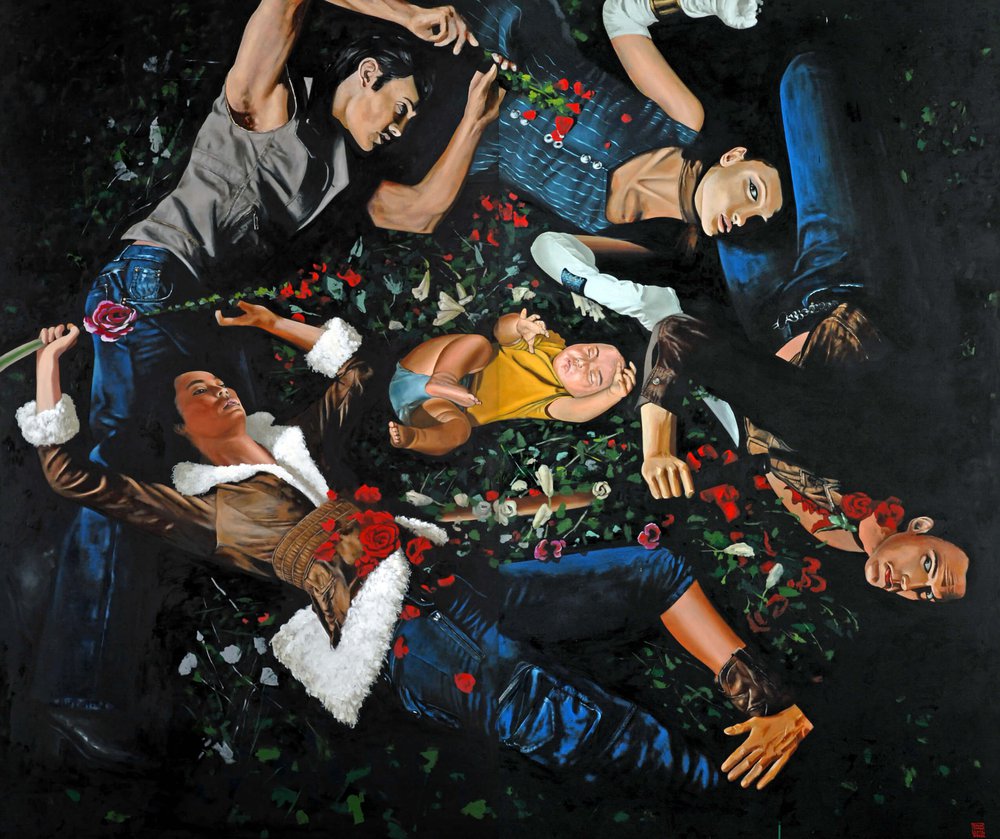 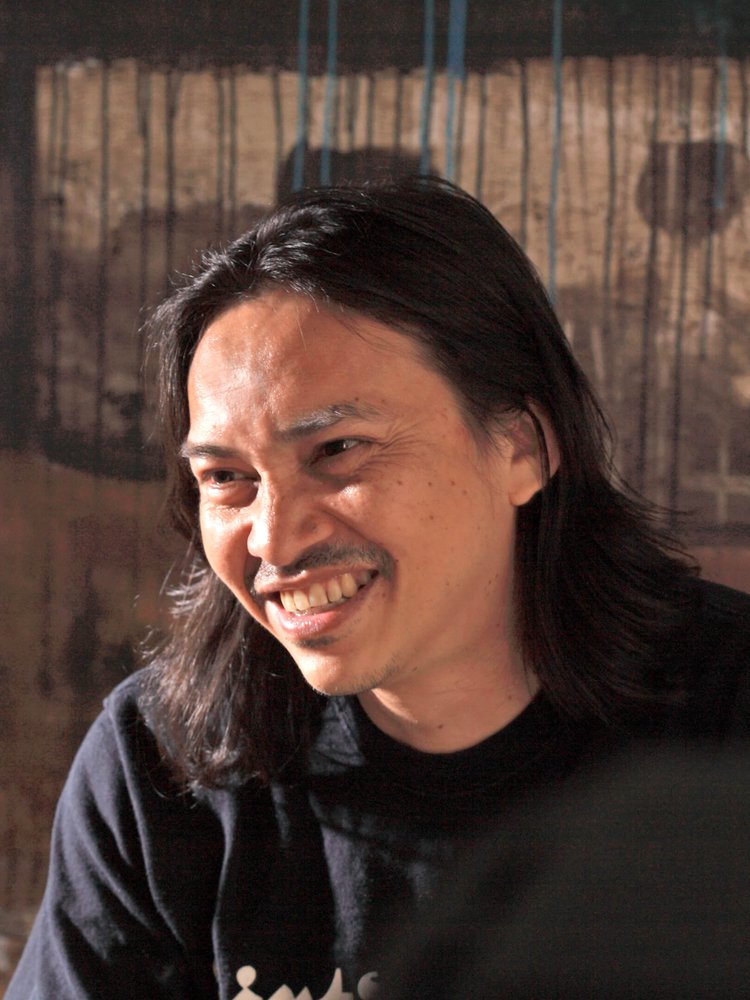 Ahmad Fuad Osman’s early works were defined by experimentation. He adopted the tools of abstraction after graduation and his earliest work in this collection, Midnight Song Mulu (1993), is evidence of this inclination. The work, also embedded within expressionist grounds, features a colourful abstract shapes that loosely refer to tribal art and the vibrancy of East Malaysia’s landscape.

It’s also the product of a trip in the nineties that the artist took with fellow Matahati members. Matahati, an art collective of five artists that met at university, remains Malaysia’s longest surviving art collective and during their burgeoning years, parallels are obvious in their works; the use of abstraction can also be seen in the early phases of Hamir Soib’s and Masnoor Ramli Mahmud’s work, and, the theme of isolation and self-identity spreads across the early works of the entire collective. Indeed, four of the five members lived and worked together after university (only Ahmad Shukri Mohamed lived apart, as he was assisting the artist, Fauzan Omar).

Ahmad Fuad’s Lost series from 1994 marked a new beginning. The artist realised that abstraction lacked recognisable elements, posed a weighty challenge to audiences, and distanced them from the intended message in his paintings. In Lost III [1994] and Lost Series #5 – Identity Crisis [1994] , we see a clearer representation of figures, but it is in works from the following year – Nightmare and Silent Sorrow (both 1995) that we see a distinct move towards more narrative and literal compositions. Both works touch on the subject of the human condition and also exemplify project more sophisticated and less self-referential themes.

They are also the artist’s reactions to the grandiose plans laid out during the heady era of Malaysia’s fourth Prime Minister, Tun Dr Mahathir Mohamad; despite the promises of economic and social development, the artist observed that many social problems remained unresolved and obscured by the gleam of skyscrapers.

If the nineties were a transitory period for Ahmad Fuad and the trajectory of ‘otherness’ and ‘isolation’ was in place, these elements were only exaggerated a decade later through the multiple residency programs that he participated in abroad and at home.

His first exchange was with the Freeman Foundation in Vermont (2004) and the paintings he produced during this residency touch on the subject of identity and foreignness. In Another Hope (2004), a nude male figure stands solitarily against a bleak, snowy-white landscape. It contrasts greatly with the artist’s own and there is an innocence in the portrayal of the subject who has a quiet but quizzical gaze at his own body and nudeness. Technically, there’s also a heightened sense of realism in this body of work.

This achievement is extended further during the artist’s next sojourn abroad in Goyang, South Korea (2005-06), where the treatment of the figures lean towards photorealism. The two works from the artist’s Fatamorgana series in this collection illustrate this change; there is a shiny plasticity to the figures that recall mannequins that, coupled with fashion magazines poses, highlight the superficiality the artist observed in his temporary environment.

Ahmad Fuad’s last residency was in his own country at Rimbun Dahan, Kuang (2007-08), where he produced the notable series Recollections of Long Lost Memories. It delves into local history and Ahmad Fuad’s thesis is that ‘history if false memory’.

Digitally manipulating a present-day figure onto archival photographs, the artist reminds us that retrospection is selective and accuracy is precarious, and, the first painting of this series offers an emphatic endorsement of this proposition: the satirical element present in the coloured figure facing Malaysia’s first Prime Minister and his mocking expression and pose alludes to how little we truly know about history and choose to discover. 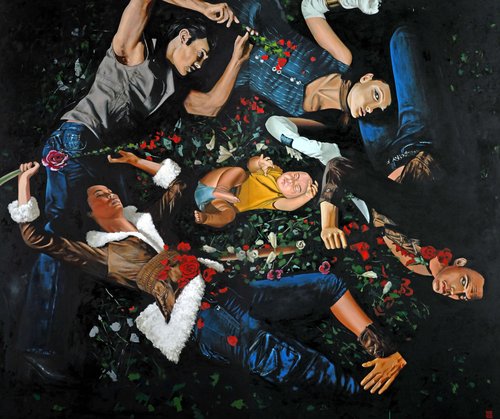 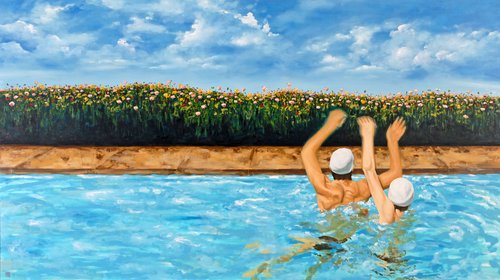 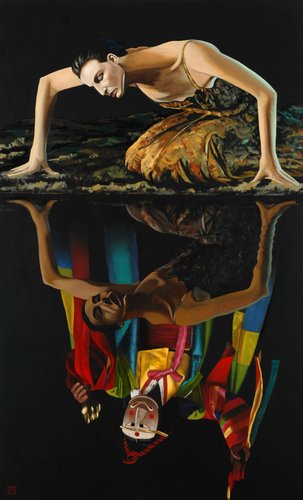 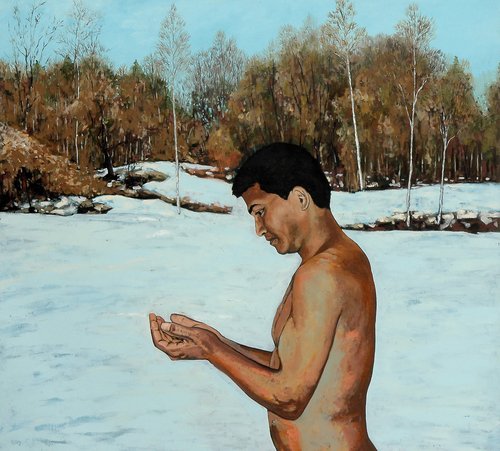 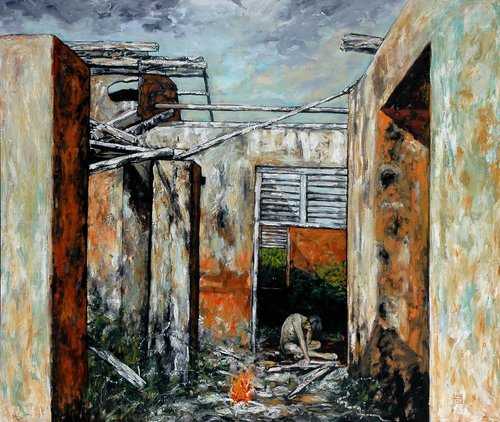 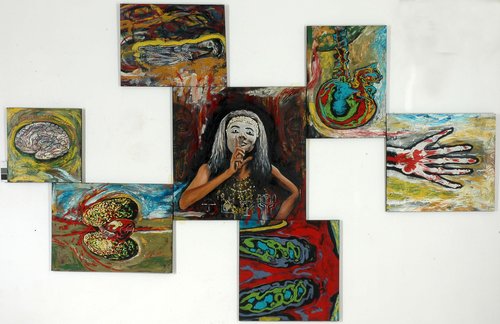 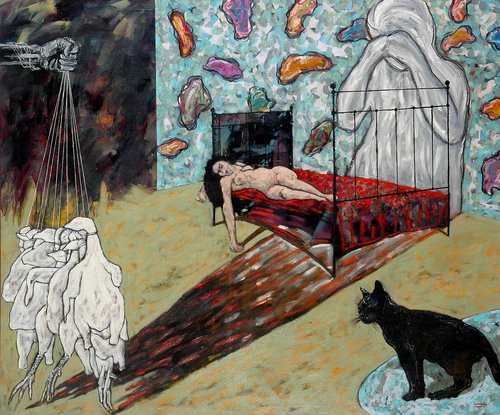 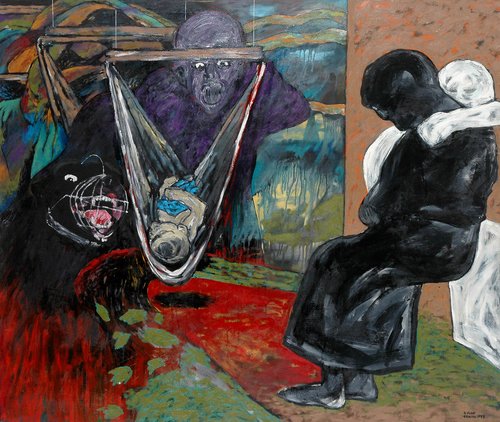 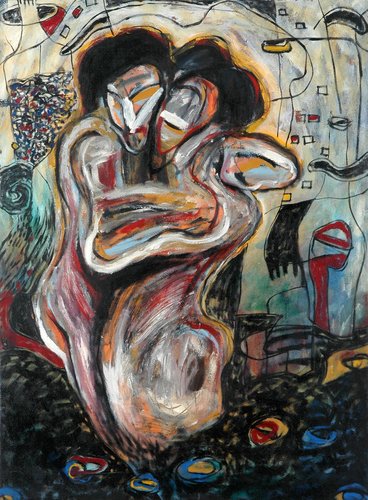 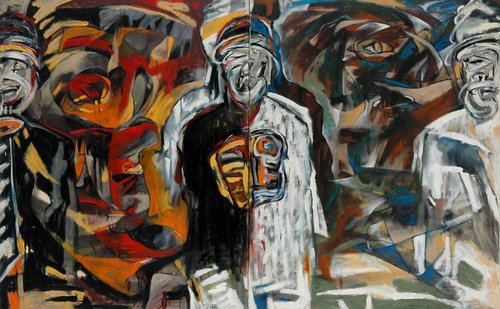 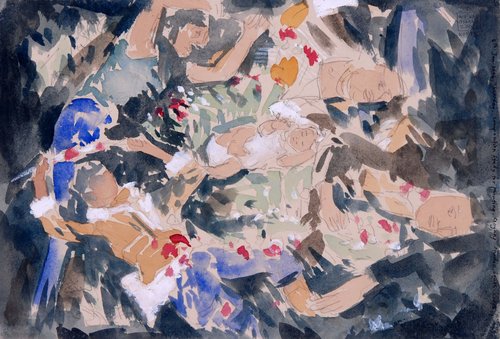 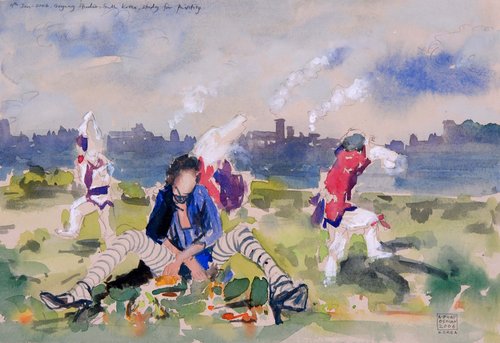 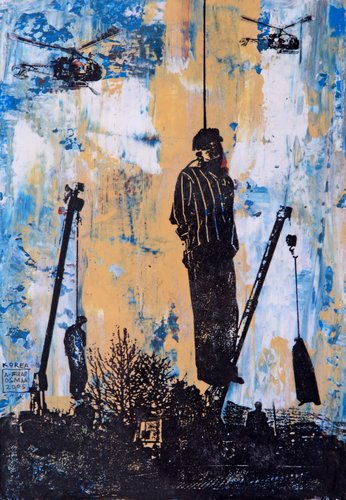 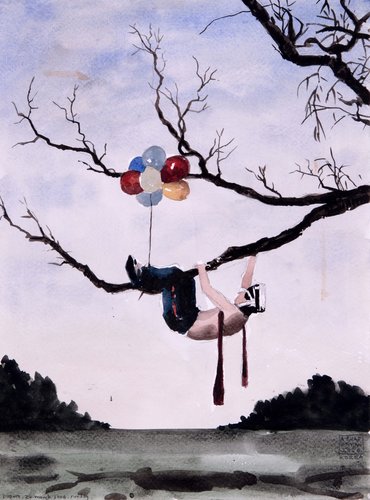 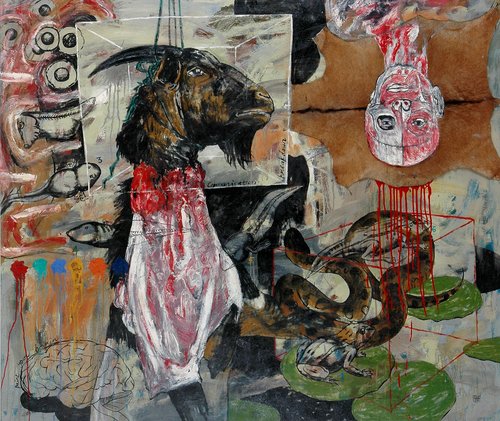 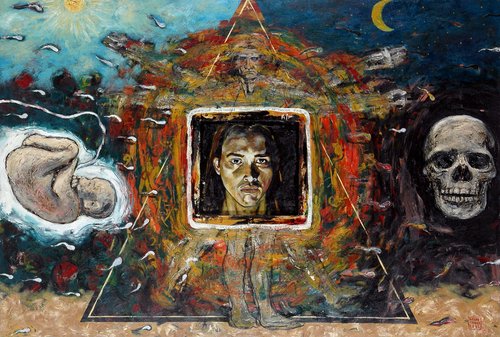 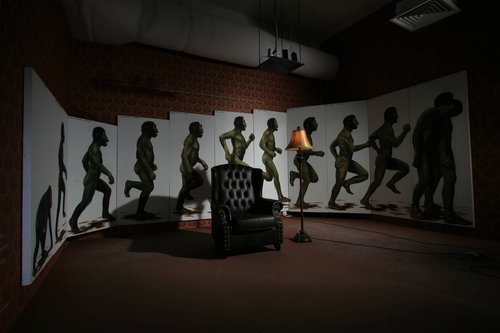 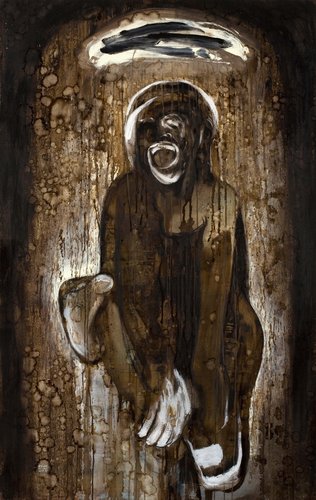 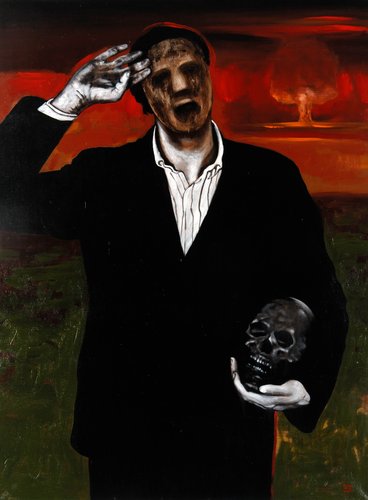 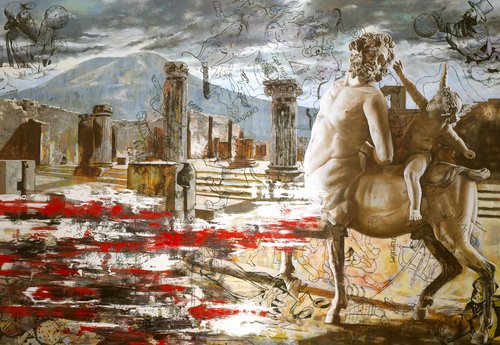 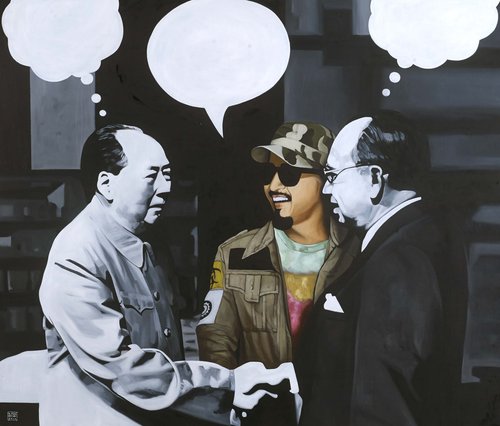 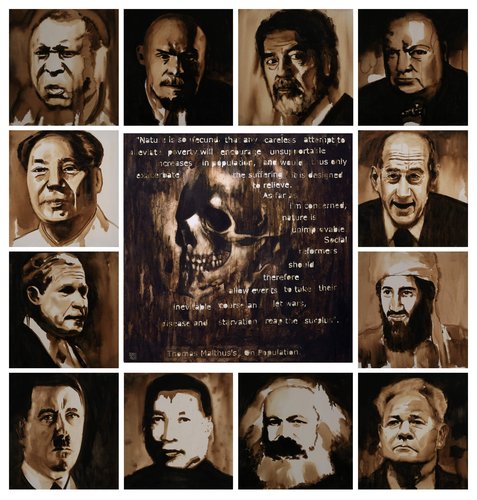 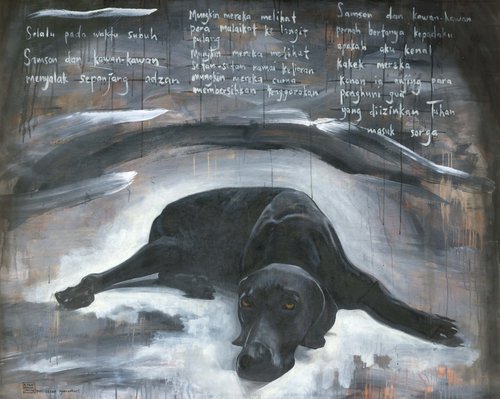 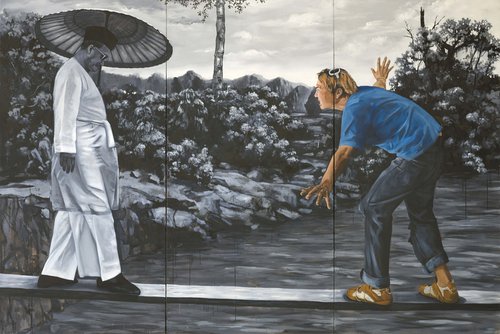 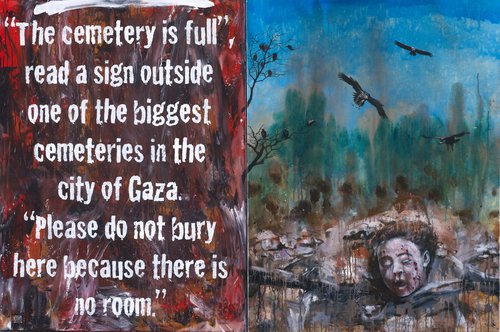 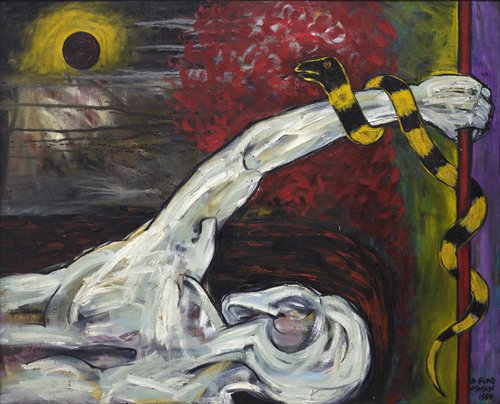